This post is for the running status of the red laser.

The red laser is reaching end of life, it is throwing a lot of errors and there is really not much I can do about it.

It has one new tube in it, but the other tube has issues so it only is 60w for the rest of its life.

Rastering is the main way it throws errors so if you are just cutting and engraving it can normally still get the job done.

Main point is if you can use blue 100% do.
We are working on bringing at least 3 new lasers up with air assist in the very near future (30-45) days.
And pearl a 100w air assist laser is possible to be ready within a week if someone wants to reach out to me that has some fab skills and finish the punch list items.

In the short term, it might make sense to include “no rastering” in the header for Red on skedda. Just to add another bit of help for advance planning for those using the lasers

Good point @stepho, I’ll add that to the info on there and see if I can link this post. This is now pinned in the laser category for the next 3 months/until we take it down and fully decommission red (which will not occur before an equivalent laser is up).

Bah, that’s one of the fields that doesn’t do links. I still made a reference to it though. This is what was added:

IMPORTANT: This laser is reaching EOL and is not suitable for rastering due to errors. See LASERS category in yo.asmbly.org for more details.

Out of curiosity, what’s gonna happen to red after? Is it just not feasible to overhaul? or does it just make more sense to sell or donate it somewhere? i ask because if we’re attempting an overhaul it’s something i’d be willing to put some time and energy towards for the sake of learning about these machines

what kind of fab skills do you need to get it done?

No reason we wouldn’t welcome the fab skills right now to refurb it- but, I’ve been hero’ing in on Red (XL12000) whenever needed and by this point I might know more about the ins and outs of this great-but-obscure model than anyone in the country. It has been great, we’ve put a CRAZY number of hours on it, but I’m moving on to getting us new lasers now.

There’s just a number of electrical and mechanical parts in Red that are not readily replaceable by this point, and not a lot of documentation. It’s intended to be a closed system and won’t tolerate much for modifications, so, like, we can’t replace the x-servo. If it were just fabbing a few parts, we might have, but it looks like there’s some PCBs doing funny stuff. Actually I’ve done PCB fixes on it a number of times but this don’t make much sense anymore.

It’s hard to justify a major rebuilding into something new and different overall too, because there’s key components like the gantry that simply couldn’t be replaced if damaged by, say, fire. It was a custom extrusion that was designed exclusively for ULS and they have none left. Actually I think their thin aluminum gantry extrusion with integrated negative-V’s may have been the greatest of all time for laser gantries, but I wouldn’t try to rebuild something new around it.

that makes sense, kinda figured it was some situation like that if folks were ready to move on from it

oh and idk if i made it very clear bc i’m still getting used to discourse, but if yall need a hand installing wall boxes, breakers or basic electrical connections for the new lasers, i have some experience there, and some general experience with electronics that may be applicable depending on what needs done

@junipertree glad to know you have interest in this stuff and would like to help! To echo what Danny said, when it comes to Red in particular we’re just ready to move on and pass it to someone else interested in tinkering with it. We’ve got so many other machine projects with a lot more promise that it just doesn’t make sense to keep investing in this one with such diminishing returns. Volunteer efforts are an important resource we want to be sure are invested wisely!

Be sure to connect with @EricP on other similar projects we can get you involved with. There are definitely a lot around the space!

Thanks for offering to help! Honestly it’s just a lot of small tasks that need to be done.

For example on pearl we just need the computer station set up nice again.

The computer also needs to have its operating system copied onto an solid state drive.

If you’d like to help on part of this feel free to DM me for any more details. 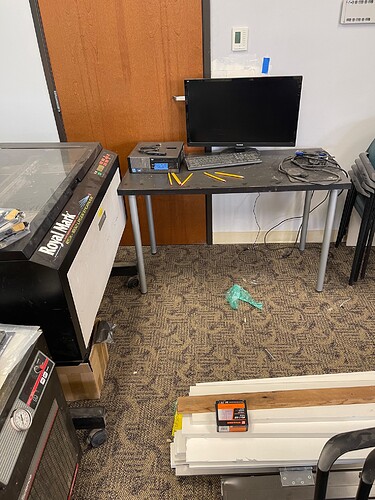 Red would not power up.

Reset the red e-stop switch, but no change.

Tried the breaker switch on the back - fans spin up but the breaker trips almost immediately. Aha - reset the e-stop to “up” and it’s working

Fwiw - Wiring at that back breaker looks dodgy as hell. There was a bare connection between two wires (ground?) so I put a cap on that connection. But there’s also a chassis ground wire just sticking out unconnected. (??)

EDIT - exhaust blower seems to be not working right. I noticed extra fumes so checked the blower and it was not running. I had to switch on the blower at the old Blue station

Was powered up when I got here, bootsband runs ok

The exhaust blower got plugged into the wrong outlet

Ill be out of town for a bit, but any info on the bigger laser/when it will be running?

I tried using both the red and blue lasers on saturday/sunday and ended up in a real bind.

The new corel draw student edition doesn’t allow you to import .dxf’s which is my #1 use for it.

I was able to install a 15 day trial of corel draw 2021 on the red laser, but couldn’t get it on the blue laser.

Hmm, I haven’t heard of this issue. The software licenses haven’t changed on these machines in ~2 yrs. The current license on Blue is the one we got when that computer was rebuilt during pre-pandemic times. I’m not aware of any software changes on Red. IIRC, anything other than the student edition for Corel was a significant increase in cost. Not sure if anyone has investigated nonprofit discounts for that since we transitioned. If someone wants to do that research and present the case for changing to the board, we can consider it.

6 posts were split to a new topic: Lightburn Laser Cutter Initiative at asmbly

Unfortunately too close to the connector for a quick repair

Red still appears to be having issues, I tried again on the weekend and this morning, and it quits out after one pass with “End of Travel Detected message”.