Creating this thread to track the major repair and maintenance of the metal lathe.

First step is to put some wood down on the ways so your finger is cushioned when the rust breaks free and chuck suddenly drops.

Condition was pretty nasty but cleanable. The pinions, ring, scroll, and jaw teeth are all in good shape. Any lubrication in the system had dried out and become rocklike. I scrubbed on it for a couple of hours and it now runs much better.

Lead tip of the scroll is damaged a little and could use a little reshaping.

@AdamH Thank you!! I am waiting on a new 2 position power switch to install. I can meet Sat to look at the tailstock?

Saturday is good. I’d like to start about 10am but am flexible. @JoeN

@AdamH I won’t be able to make it tomorrow.

@JoeN OK. I’ll be in and take a look at the gearbox.

Thank you @AdamH for taking an interest and making the metal lathe better. I got the power switch in yesterday. I will get to installing that this week. I will get some gloves and clear the chip tray. It is time to see if the pump works.

We had talked about the sheer pins possibly being broken. If that is the case. Please let me know the size so I can order some. 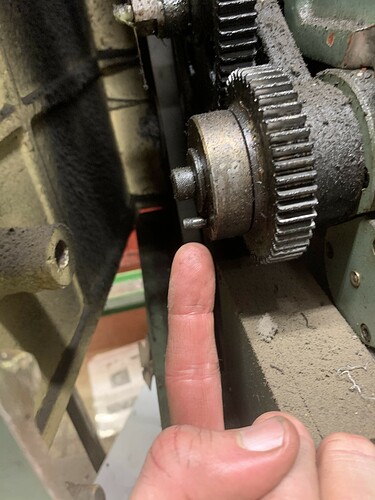 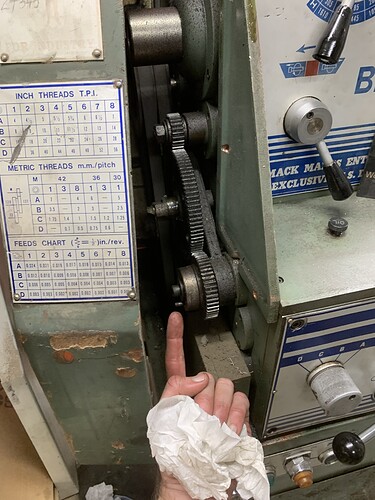 It wasn’t the shear pin. This little pin on the change gear which transfers power from the headstock down to the transmission. It was mostly worked out of its hole but would occasionally snag the hole and provide drive. I think it has crosshatching for an interference fit. I tapped it in with a soft hammer.

I also took off the headstock cover. The gears there all look good but I think the oil had a bit of water in it. It wasn’t like a peanut butter but it did have that opaque look.

I took off the front of the transmission and confirmed that everything in there worked like I thought it did.

Once I had the wayward pin back in place and was spinning the chuck by hand the transmission would occasionally bind. It would only do this with that final change gear going in one direction and only with the transmission faceplate on. I think it is the gear catching on the ABCD gear positioning block. It is a brass guide which slides a gear along a splined shaft. I swapped the guide block with the 1-8 position one since it was a little deeper which seemed to fit the situation better. The change didn’t help. Maybe putting on some Dykem will let us figure out what is happening since it only happens when buttoned up.

I took apart and cleaned the cross slide but not the compound.

I did some cutting without engaging the transmission since I didn’t want to jam the situation under power. It is pretty cool that there is a gear which can run the transmission in F and R independent of chuck rotation. Absolutely awesome for thread cutting away from the chuck.

I will be in on Tuesday for the Manual Mill class. 6 pm start so if you want to meet earlier we can play a little with the transmission. 430 or 5 would work for me.

Thank you!!! for investigating, cleaning and fixing. I can meet earlier on Tuesday. How about 4pm?

I should have a pneumatic vacuum pump by then to clear out the oil in the headstock. I will bring the switch, clean the trough, and bring coolant

Thank you @AdamH It was pleasure working with you to resolve issues.

We also worked on some of the gearing issues with the power feed. We have resolved a few issues and will do more work to resolved the remaining issues.

I was thinking about the steel one. I wonder if we can machine the channel larger and braze in brass?

I think that would be workable. The diagram shows the piece in brass so the steel is definitely not the design. The diagram has the channel longer than current steel piece which would give better alignment. That guide has the least vertical range so that would be the least necessary of the blocks to have the length. The brass could be built up in that direction.

The pin on the change gears on the side is supposed to be a brass shear pin, as well. We will need to move the table to access and address that side at some point.

I had trouble getting it to stay in gear at 1050 rpm. It would stay on that gear in low but not high.

Cleaning the compound and repairing the tailstock are my next targets.

The action on mill table is looming as a necessary clean and Eric said the DRO was iffy.

I looked at the catch basin. There might be a hole in the basin or there is a gasket missing. We will investigate further.

@AdamH Let me know the next time you will be free to look at the headstock. I will bring the fluid pump to change the fluid. We will investigate the “1050” rpm issue.

I made a steel block for the alignment adjusters in the tailstock. Milled the casting for it to register on and secured with screws. Tailstock alignment seems to be 1-2 thou over 6 inches.

Let me know the type of oil for the gear box. I will bring it with me to do the fluid change. I’m not sure when. I have a crazy week and have to travel out of town

Found the info on https://www.practicalmachinist.com/vb/general-archive/searching-oil-shell-tellus-27-equivalent-77490/

Cleaning the compound is the next big quality of life project. Then I’ll get to work on the mill.

There are machining classes Mon and Tues. I might be in Wed afternoon/eve. Maybe this weekend. Not next week.

Thanks for the overhaul. The power feed was on my list but I never found the “Round Tuit” I needed.

I need to put inner and outer threads on some 2" stuff. I’ll give that a try at some point.

And, given that this is feasible, I probably need to finally pull the trigger on getting qualified on the Tormach.