Hey guys,
I’m working on getting the fiber laser up and running. If you want to contribute or are just curious on what the status is, I’m tracking the project in this google doc

Thanks for getting this going! The fiber laser is a long-running project and already has a great deal of design elements already extensively worked out on most fronts. The primary question is what size do we want the bed to be and how the load-bearing support bed slats go together. I don’t have slats.

That work support area aspect I’m a little unclear on. It does bear the weight of the stock, which can be quite high. The axes and laser head do not have much weight themselves, but the supporting bed will sometimes have to bear considerable weight, and I think there’s a concern about the bed distorting under uneven weight, but the laser does have height control so it’s hard to picture sagging enough to affect the run.

A prime consideration of the build is how to handle the flexing of the fiber cable. Fiber cables are expensive. If just used to move a beam from two fixed points, it would last forever.
In CNC use where it has to bend, they have a finite life, usually quite long, but it is drastically reduced as the bending radius gets tighter. So it is extremely important to keep the worst-case bending radius anywhere on the cable as wide as possible at all times.

The 1000FL has a fairly advanced service interface, but at its core, it simply needs an Enable (safety) and a low-current PWM logic signal. It has its own power supply. It does have a chiller associated with it that is fundamentally part of its operation. All this runs on 208v. Yes, I have the fiber source, chiller, head, fiber cable, and controller as a complete unit.

There are safety questions I’m not wholly clear on how we handle, is this going to have its own room or some sort of large enclosure?

It’s unlikely you’ll get a dedicated room, just because we don’t have enough square footage for dedicated material handling space. I was expecting the machine would be guarded, but we could do something vaguely room-shaped like partitions on wheels that open on any side for loading and unloading.

I think it’d be best if the cutting bed could be fully enclosed with interlocking on all the doors. Maybe with a clamshell or an upper enclosure that lifts straight up to fully expose the moving parts for service.

Idea board - I worked on one of these in college; this kind of enclosure provides a lot of room for loading and unloading but is easy to interlock. 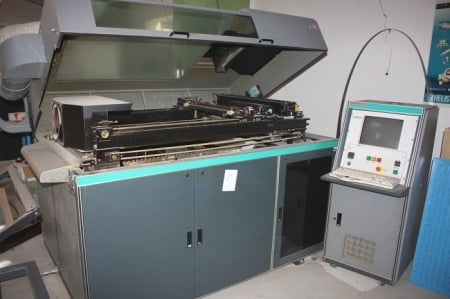 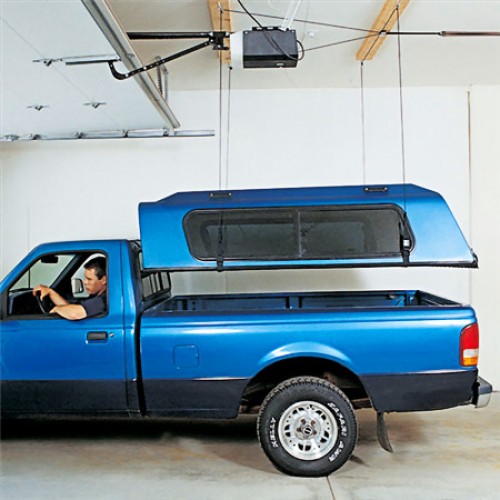 For the slats, if I threw together a design for them and the supporting structure in fusion, would a plasma cut of that do the trick?

I am talking with a guy who used to sell high end fiber lasers. He pointed me to Kentek to for laser ppe and enclosures. They are the standard for ppe. The frame needs to me 4 x 4" x 1/4" square pipe steel. I can help make slats. The front area needs some kind of roller system to help load. You can also add 2 rollers that are air actuated to help with loading.

The fiber laser source has a controller with it along with its power supply, its main role in regular use is to just take the PWM logic signal, drive power to the fiber source, and turns it into laser output. It’s a different part than the motion controller or stepper driver.

Other companies use drag chain for channeling the the fiber. We would get very big drag chain and check the lengths to make sure we are not putting to tight of a radius on the fiber

Yes drag chain is the common solution. Every drag chain comes with a minimum-bending-radius protection, the R-number. The chain will refuse to roll tighter than that, the links each hit an angular stop.

However, last time I looked through this, of the drag chain parts I saw the biggest min-radius was 75mm. That seems lower than the cable should be bending in. I’m not sure what the cable’s min radius is, but that does seem too low.

We could 3D print links of any specification, but I would assume a compatible type of drag chain is available since fiber lasers are a big application and this one isn’t different in its cable design

Would this R100 drag chain work? IIrc the diameter of the fiber cable is 13mm, so internally there should be plenty of space
edit: I forgot that the coolant also needs to flow through the drag chain, I’m not sure how large those lines are

Is there a reason we’d use square stock? Because afaik we’d get comparable weight support with rectangular stock for less overall cost.

It doesn’t matter to me. As long at we use thick wall steel for the base. 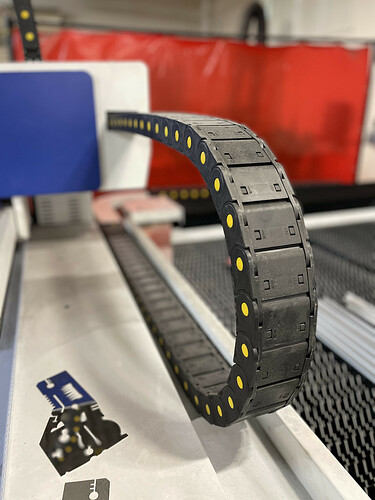 Would this R100 drag chain work? IIrc the diameter of the fiber cable is 13mm, so internally there should be plenty of space
edit: I forgot that the coolant also needs to flow through the drag chain, I’m not sure how large those lines are

Pics of the drag chain

R100 specifically is too tight though, that will damage the cable. I think I see the right stuff
In regards to coolant lines, most of the cooling load goes to the fiber source. The head needs some water coolant flow. I don’t know if these split off- which is sort of risky, if say the line gets pinched closed then the flow just diverts to the other path and no high pressure develops to force it back open and whatever needed the coolant flow can be damaged. If they’re in series, then the lines will be large. I think it works by splitting off, I need to check.

Do you know what R number that is?

The rule of thumb for communications fiber is 10d minimum static, 20d better (so 130-260mm for 13mm cable). Continuous flexing has gotta be harder on fiber than just sitting around, so I’m not sure if 20d is enough.

@dannym do you know a part/model # for the cable we have? Is there a bend spec in the manual?

I will look at the sizing of the drag chain so we can reference that number once we get the fiber size.

The OEM fiber cables are the QBH and QD versions. They list a maximum torsion of 90 degrees per meter which… Seems extremely large? Perhaps I’m not interpreting it correctly, but if we actually need 2 meters for a 180 degree turn then I think we’d need a more clever solution than huge drag chains
edit nvm, I think that’s rotation along the axis of the wire

I reached out to Coherent about the bend radius, and they sent me this presentation which (depending on cable model) recommends a min bend radius of between 150-200mm. So perhaps this drag chain would work?

There is R300 drag chain. Frequent dynamically bending of fiber is an ALARA scenario, so R300 would be used on the side, but depending on the design of the Y-Z transition, R300 probably will not have the room to be used there. The Y-Z axis sees very little dynamic motion relative to the ground-to-X axis so this is fine.

I’m not sure I follow, you’re suggesting R300 for the largest dimension, what would we use for the two other dimensions?