I spent several hours doing various cleanup things at the space this weekend and thought I’d fix the loose paper towel holder in the shop bathroom “real quick”. Unfortunately, I ended up breaking it more…

The original place it was mounted was doomed to never be fully secure against the wall because the sheetrock was bulging away from the wall thus always leaving a jiggly gap. I suspect this may be because there is a stud or something else solid behind this spot and thus the anchor reached a point where it simply started pushing against whatever solid material and pulling the drywall forward. 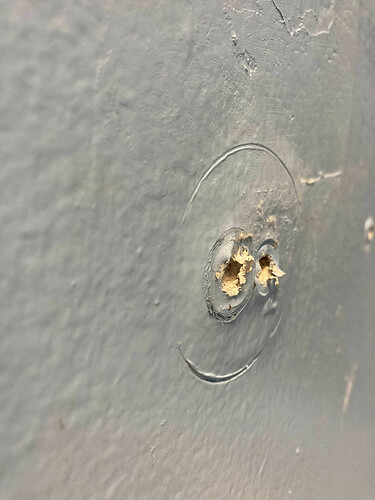 I tried moving it to the wall the mirror is on right above the trash can after confirming dry wall only there (I think that’s also maybe a better spot) and tried to reuse the drywall anchors but had one completely break on me leaving it stuck in the wall.

I left the paper towel roll on the hand rail and put the pieces for the towel rack in the cabinet. Can someone pull out the stuck anchor and fix this? I think the spot above the trash can will be the best place for this to live, but we’ll probably need to adjust it down a bit as I imagine the holes I made are no longer usable.

The underlying problem is that the instutitional towel rolls are put on a holder that was designed for consumer paper towels. The rolls are too big. I suspect that as people fight the paper towel roll, it torques the holder. If we want to use institutional towels, then we really should get a different holder, or put a spacer block against the wall for the existing one. And it should be anchored to a stud. I’ll bring some scrap this weekend, and a stud finder. Drywall anchors are not much use in a commercial / public setting.

Thanks @cfstaley! I almost wonder if the paper towel holders ought to switch so that we’ve got the institutional dispenser in the shop bathroom (which I would think will inherently have much more use) and the consumer one in the lounge side bathroom so that that one can be the more polished presentable looking one.

Also, I’m not sure if I just wasn’t looking in the right place, but I was not finding Phillips head bits. I can put in an Amazon order for some later. I feel like that’s an item we should replenish for the space periodically. Silly to have that be something a member has to search for and not find.

Someone graciously left a set of rosette nuts to secure the sink. That is done. @cfstaley was working on the paper towel dispenser solution. The shop bathroom is slowly getting better

I didn’t get to the PT holder this weekend. I’m out next weekend. I can do it the following. I’ll need to pick up some toggles.

Where is the towel holder? I have toggle bolts

Last I saw, it was on the welding table by the bathroom. The idea is to mount the large commercial towel holder. Then we can move the decorative holder to the other bathroom.

I have some light pencil marks above and below the damaged areas of drywall, where the holder was. The marks indicate the edges of the stud. They might be hard to find. With metal studs and toggles, the location might be meaningless.

No worries. I have a stud finder. I will mount the paper towels as you have mentioned