The metal barrel in the woodshop falls over

I noticed that the metal barrel and cart had been flipped over yesterday (~8 PM). After righting them, I turned on the router, and they both flipped over again. 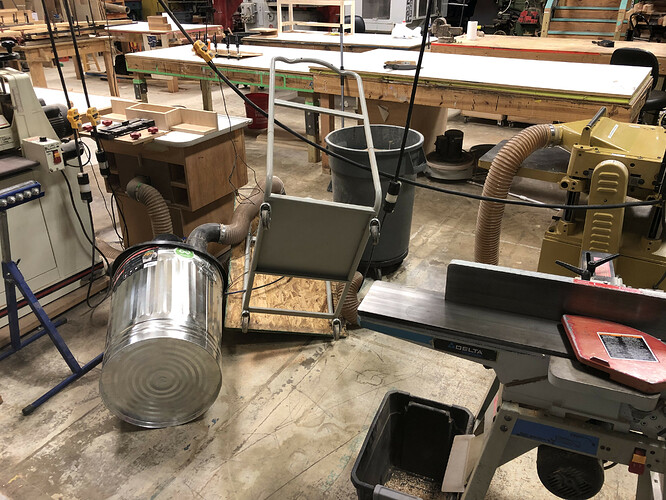 I believe the issue is that turning on the dust vacuum causes the flexible ductwork to tighten up quickly, which pulls the barrel and then the cart over (the barrel was mostly empty, so there wasn’t enough counterweight). Reorienting the cart so that the barrel’s outflow goes under the cart’s siderail and points towards the table saw seemed to fix the issue:

Is this how it should be situated? If so, I could add some indication of that, like with tape on the floor or a sign.

I’m not sure what the problem is, it’s certainly not supposed to fall over. We did test it, and had no prob like that. I’d like to see the situation that caused it. While it’s not going to fall over because of this alone, my guess is that its configuration has been manually changed in an attempt to do “something” and resulted in closing the system entirely and it built up more suction that it was ever designed to have.

I came by this afternoon and found someone had removed the dust collector port for the miter station and installed a cap at the “Y” for the branch leading that way. I’m not clear what they were trying to accomplish, but that really shouldn’t be done and might cause problems that could do something like that.

I think one possibility is that the sensor on power cord to the router doesn’t always trigger its corresponding vent to open (I believe that particular sensor also had that issue when we updated the dust system on the workday a few weekends ago). If power sensor triggers the vacuum to come on, but doesn’t cause the vent to open, then the air would have nowhere to go and probably cause the ductwork to tighten up a lot.

Is this an actual event of…Doing a Barrel Roll?..I’ll see myself out

There was a bad sensor on the hand router when we installed it, but quickly replaced it. I haven’t seen a problem with it since, but the sensitivity can be adjusted.

If specifically the cord sensor isn’t working, I don’t think it can trigger the dust collector but not open the blast gate. It should be all-or-nothing. If the DC starts but the blast gate doesn’t open, then that should mean the blast gate is the prob- unplugged or most likely the switch is set to “off”.

If any of the specified gates are off for any reason (including being unplugged or set to “off”), there is a default #1 gate that it will open (as long as it’s still plugged in and set to “auto” and its hose isn’t clogged). I believe I set that to be the miter station. So when someone pulled the hose off the miter station branch and capped it, that defeats the protections and created a serious problem.

It might help to have a written list of things to check somewhere for when it’s not working as expected. I’ve seen it on when none of the woodshop equipment was on, but I had no clue on how to shut it down, and no clue on how to start looking at the problem.