Laser focusing methods for a large, open membership of new users is often rather error-prone, and some errors can damage the machine. So, one night I came up with this idea, and it looks pretty intuitive and awesome, as well as accurate.

They make green laser pointers that project a cross. There will be one mounted off to the side, and project at an angle. Since it’s at an angle, the green cross center will shift with the height but the red dot will not. The cross and red dot converge at the focal point. You can see it moving to one side or the other with Z UP/DOWN so pretty intuitive to make them converge without thinking about which way it needs. Clear acrylic is a problem, as this projects through and all you see is it on the honeycomb. I believe we can easily explain that you need to put paper on top of acrylic (or very black stuff) to see the cross there.

We need a mount. This green cross module is 9.2mm diameter. It needs to be adjustable, accurate and hard to shake or bump out of place.

PXL_20211105_0010089831944×2592 1.16 MB
This is a CNC’ed aluminum tube mount, but it is meant for a larger tube and does not fit. I don’t see sticking something in here as a shim to make it fit. Also, this design is poor as there’s only one screw to tighten the tube ring and the angle of the pointer, instead one tends to engage first and leave the other loose. It needs to be strong and rigid and exposed to a lot and I don’t picture 3D printing as a good option.

Mounting on the tube has pros and cons. The tube with the lens inside can be raised and lowered for machines without a powered Z, but we DO have a powered Z, so the tube should stay up. But someone might mistakenly move it- at least the focal point will not be thrown off if it’s mounted on the tube. However, the tube is removed to access the lens, and the pointer and wiring there complicates this. 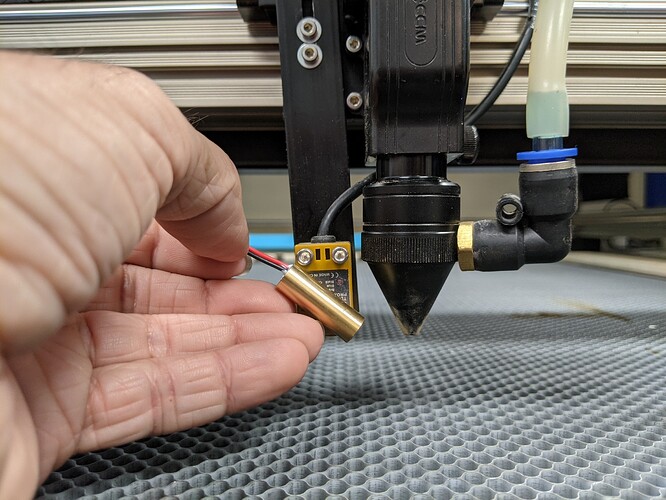 PXL_20211105_0011158372592×1944 1.16 MB
I’m picturing replacing this inductive prox sensor (that method has risks) with the pointer mounted at 45 deg, or even a bit more horizontal. Same 2 attachment screws up top as shown. The mount would need to stand the pointer off more than the prox sensor so there’s no Y offset that would require a weird mounting angle. It is good to keep the weight down so the head can move fast. Again, needs to be adjustable in angle and height and the pointer should be removable.

I worried about interference with the machine when the axis moves far-left, but the pointer is under the XY support at that point. It looks clear to poke a little further out than the current piece. The module must be set far back enough that the cone can be unscrewed downward without interference. The laser module can be rotated with its cross. When looking at it from above, the cross will likely be at 45 deg, not vert/horizontal, since the right horizontal side of a cross projection would partially clip against the cone in this orientation.

Thoughts? Anyone want to fab one?

Sounds great, Danny, but can we also plan for a traditional focal length tool? 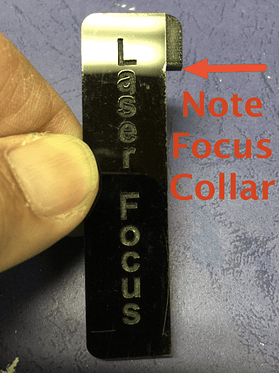 Yes we certainly can. And the pointer might be bumped at some point so there should be a clear reference tool to reset it. So far I am just working from the focal point being 8.2mm from the tip of the air assist cone.

I’m a bit unclear on where the stick would reference. I thought about using one of the rings on the cone for a visual, and probably need to mark that feature somehow on the head, but you still have to bend down and look carefully.

Another choice might be the rectangular carriage body the downtube extends from. It’s a radiused edge. If we did a focus tool like used on ULS lasers, that needs to be able to push itself off the feature as it goes too low, and not pinch there. So it could share the same radius, but has to end when the radius gets like 60 deg from horizontal so it can push away.

How about this variation to make proper placement super-obvious? 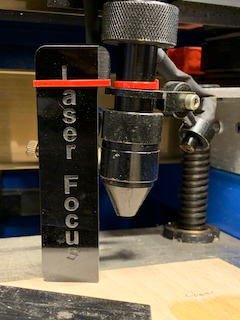 The rectangular carriage model is a good option too if it references off of a predictable point.

It’s consistent as long as the tube isn’t extended by someone who tries to use it like a fixed-bed machine. In that regard, referencing on the tube/cone would still yield the correct focus.

I think I may just replace the thumbscrew for loosening that tube with a hex cap screw, so you can see you’re not supposed to be fiddling with it. However, you do still need to be able to drop the tube to inspect/clean/replace the lens.

That sounds like a great idea. Thumbscrews invite fiddling if somebody’s trying to figure out a problem.