In case you didn’t know, Solidworks has a “Maker” license that’s $10/mo or $99/yr that they introduced late 2021. This is really nice because before, methods to legally license solidworks at such a low price seemed shady like a loophole waiting to be closed, and now they have an official way to do this without such weirdness.

Presenting this as an alternative to Fusion 360, because their subscription cost for Fusion 360 just increased again ($500/yr now) and they continually remove features from the free personal license - I used to use Fusion 360 but moved back to Solidworks after getting fed up with the 10-document-limit they introduced a couple years ago

I like Solidworks because it has a very proven reputation and is used by professional engineering firms- I learned Solidworks when I had an internship at Southwest Research Institute a decade ago. The features, reliability, and toolsets Solidworks offers are going to be professional grade. I think the Solidworks Maker license is worth it if you need those features or are already used to the workflow and don’t mind paying for a relatively low-cost license.

Professional design tools for hobbies and personal projects. Easy to learn, fun to use, and only US$99 a year or US$9.99 a month*

That’s a good deal for personal use. As a space, we get a pretty killer deal on Fusion360 and I believe there are members that are well versed in Fusion that could possibly teach.

Ahhh, what’s the deal? Are they education/maker licenses for individuals who are members? I’m actually on a project where I need to get back on Fusion 360, currently using a bit of a dodgy account borrowing at the moment

We don’t have membership-level licenses at this time. It’s only for the physical space to my knowledge.

we get a pretty killer deal on Fusion360

Thanks Randall, I didn’t know we’d taken up that offer at Asmbly. As a 501c3 I’ve qualified and used it for several years at SDFWA as a way of getting our most dedicated staff access to a powerful tool. If you’re curious to know more then look at the offerings below. My path to that deal has been through TechSoup who charges that “Administration” fee which grants the license to qualified applicants.

That’s awesome. I never could get the hang of Fusion. I’ve always preferred SOLIDWORKS but it wasn’t affordable for personal use.

Does that Solidworks offer include the CAM stuff? That used to be another big purchase on top of Solidworks, itself, while it is included in Fusion 360.

I haven’t tracked what Solidworks offers lately vs Fusion 360–but I remember that there were a lot of things (CAM, Sheet Metal, Motion Modeling) that Fusion 360 had that were extra add-ons with Solidworks.

I hope so, I want to learn how to use the Tormach so this is pretty important for me… let me look it up. 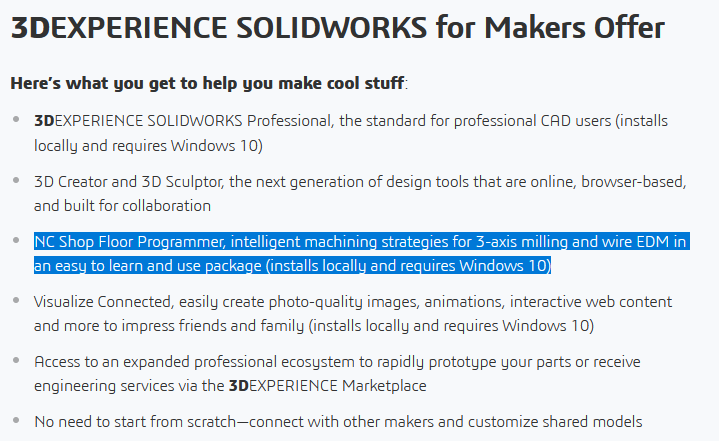 edit: so I asked some peers and they say yes, this is a CAM package (and that Dassault has a bad habit of not wanting to explicitly name things very obvious names)

Thanks! I’ll be using this code, wow that’s cheap