Epoxy on veneer marquetry really pops! Fresh from the bulb-warmed oven, my only temperature-controlled space during cold winter months. Gotta get that epoxy to cure right! 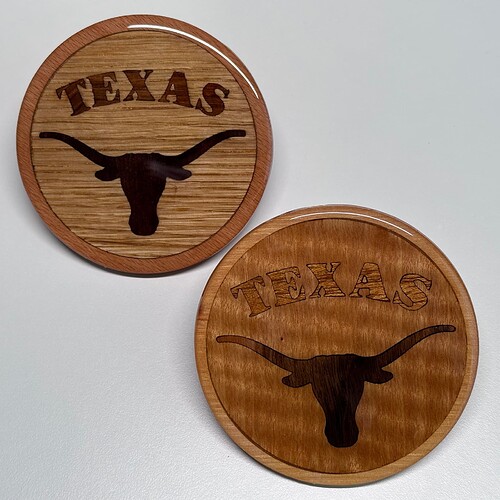 Travis, these are really nice and definitely pop as you indicated. Thank you for sharing them and stirring up the creative juices.

@TravisGood, those look great! If you did the inlays on one of the lasers, I’d love to hear about your technique for accounting for the kerf in software. Do you simply “grow” the inlay design by kerf width or do you do something different?

I cur those using a $70 three-watt diode laser but they could easily (and much more quickly) have been done on a Shop Lightburn laser. They were done by growing pieces by half the kerf using the Kerf Offset feature in the Cut / Layers advanced definition. (Just double-click on any layer.)

This image contains the logic I used to determine kerf of veneers: 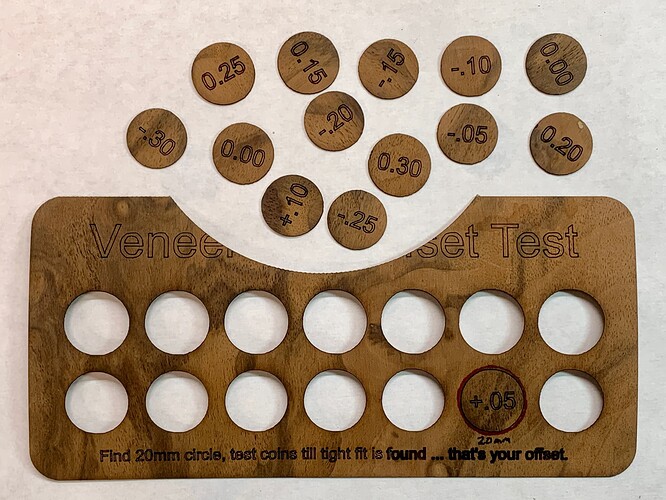 If you’re really in to marquetry then I recommend checking out ImagePaint by AmazonCanvas.com. The released version works with CNCs, lasers, and Shaper Origin as a plug-in to Adobe Illustrator. However, we’re in the late stages of a version for lasers as a plug-in to CorelDraw.

The 2.3 beta is available for download on the site.

That’s fantastic – thanks! I love the idea of using test coins and I’ll do something similar for my upcoming acrylic project. That will be my first real attempt at anything adjacent to marquetry, so I’ll keep ImagePaint in mind.