I was using the large CNC today, and it seems like it’s Z-axis isn’t as good as it has been. I’m doing cuts of material sitting against the spoil board, and I’m having an ~1/8" variance in depth of cut. Danny looked at it quickly and pointed out there are bolts missing between the frame for the bed and the frame for the X axis in the area I’m having problems with.

You can also see the problem I’m talking about if you look at the cuts in the spoil board. Straight lines have variable depth across the machine in the X direction. It’s not that the spoil board needs to be re-surfaced, it’s lost some rigidity in the past few months.

Can we have someone look at it and trace down where we might be having rigidity problems?

Cutting a full 4x8 sheet of MDF the other day I experienced the same thing. While Z performed as expected at the front where Z=0 was set, toward the middle of the table the end mill was at least a 1/16" high resulting in lots of clean-up effort afterwards. If memory serves, cuts on the far end of the bed went through again. Seemed the middle bowed down slightly.

Good info. But if I understand correctly, this means that the spoilboard is currently bowed at some particular spot or spots? While it might not need resurfacing, it sounds like a good idea to level it with a flycutter after fixing the structural issues, yes? Maybe try to be minimal to not waste material, but seems like the only way to really confirm the end result is properly planar.

We can look at it tomorrow

Yeah, I’m seeing the lack of solidness danny talked about. It needs to be made more secure before surfacing, or all the vibration will throw it out of calibration. It’s been resurfaced multiple times, it’s not poor surfacing, it’s it walking out of “calibration”. One time it’ll run, and the MDF will bow up. The next day when it runs, and the MDF bows down, and we get different zero’ing results. The MDF needs to be secured to the frame to minimize it’s movement, so when we do surface it, we get a repeatable zero’ing. The MDF is moving too much over long periods of time, when it should be nearly stationary.

The MDF should be secured to the bed with the brass screws. I’m not sure if they’ve back out over time, but they were installed prior to surfacing. The middle bed supports, where the 2 pieces of MDF join, did seem to be a problem. The old bed had bowed as well, and I suspect the new bed is suffering the same fate. We did install more supports to try to prevent the sagging in the bed, but it is still a large span. Outside of loose screws, I’d wonder if the MDF will sag or settle into to place initially after being installed. I don’t think the installation of the new bed was done any worse than the previous bed, and the extra supports should have helped out.

I don’t think we’re talking about the same thing. I’m talking about an extrusion to extrusion fastener, not extrusion to MDF. There’s bolts missing between the two extrusions. There’s holes, just no bolts in them. You have to look from underneath the machine to see the holes. At roughly 0’x4’ and 0’x6’, there’s two extrusions under the bed. The extrusions are mounted to the X axis… but the bolts for that mounting are missing. That area flexes under load, changing the Z height.

James and I added more supports and I believe we put in all of the bolts to the hold the extrusion. The issue of the table cutting differently is odd. The center joint needs a joint overlap. It is a logistical nightmare to do so.

That clarifies things Zack. I do remember Danny pointed out we missed bolts on one bracket, and I forgot to go back and fix that. A second bracket is news to me. I’ll have a look this week if nobody else has before then. I still think the bowing is caused by something else.

It cutting differently is the only thing I’m totally sure of. You can measure it by just zero’ing off against a non-beat up part of the spoil board near X=0, then try it again near X=4 feet. Most of the time I find those to be different heights by .080 in or more. In the past it’s been below .010 in.

Hmm. I think we need to add any missing hardware and fly cut the table. I know that the flycutt will mask any other issues.

We need to make sure it’s bolted tightly, or when the MDF tries to warp, it’ll throw the machine out of calibration. It’ll be better to chase that slack out if we can, or we’ll be constantly be fly cutting the spoil board and having to replace it more often.

I think that once we replace and tighten the bolts. We will see seasonal changes in the mdf. We won’t know anything without doing a flycut. We need more support in the x axis direction.

I replaced the missing bolts in the Aluminum extrusions under the MDF spoilboard. There were more bolts missing than we forgot to put in. I’m not sure if some of them vibrated loose, but we only missed 2 bolts. I replaced 6 tonight. I didn’t have any bolts to do the MDF to extrusion spots, @JoeN do you have any?

I do. I will leave them in the top drawer of the cnc kiosk for you. I won’t be able to till Sat morning. 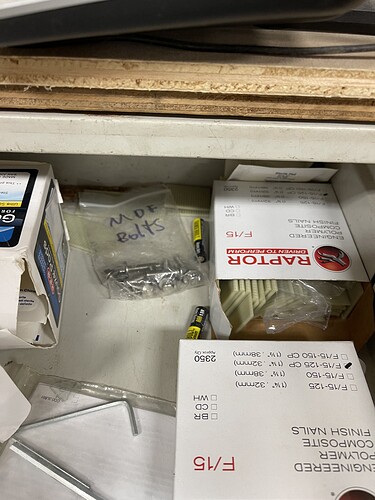 I left some bolts this morning for you. @jamesfreeman

Thanks @JoeN. I had a lengthy discussion with @dannym last night about the bed, and also rotating the entire Cnc. We are going to shoot for a couple of weeks to have everything resolved on it.

Thank you to you and @dannym for working to make it better. The table overall needs more support in the x direction. A center support at the bottom center of the table would do wonders.