hey gang - so, I got my new member tour last week. something I am really interested in is creating my own furniture as I remodel the interior of my Airstream trailer, specifically a convertible dinette/couch (with the table pushing down across the seats to form a couch bench) for the front end and something to cover over the, er, gaping wound I left across the upper back end as I removed the cabinets there. but as I pondered how to get started, some questions popped up:

I would post pics of the spots in question, but I can’t attach images or even put links into my posts according to Discourse :-/ apologies.

You’ll likely want to learn the CNC for airstream interiors. Also, learn lasers because both tools will likely be useful for you. The CNC can accommodate bigger stuff, though

I don’t have any personal experience, but everything I’ve seen about building out vehicle interiors like that involves a lot of templates on cardboard.

Yep. Cardboard, tape, hot glue. A ticking stick would be another way. An old ship building trick. Neither gets your design to the CNC.
3D mapping : latest iphone and ipad have lidar. Some Android apps seem to be emerging that can develop point clouds.

Fusion 360 has tools to convert images to vector shapes (spline curves) that can then be translated into tool paths. The first step in all this has been shared here is cardboard templates. But as a carpenter, I usually start with cheap kraft paper to make a rough pattern and cut out with scissors. THEN trace the rough shape on to carboard and scribe the contour of the Airstream on to the cardboard. Removing the waste part of the scribed line with a stationary sander speeds the process.

Repeat the process at consistent intervals along the Airstream wall.

When you think you’ve defined the surface adequately with cardboard (numbered and organized properly) take pictures of the scribed patterns. I’d do it in place with the help of a friend to hold them.

Upload the images on to your computer.

Fusion 360 (free to download personal users) offer the ability to import a picture into a “layer” if the interface. Fusion 360 has a LOT of YouTube videos to learn this very powerful application.

This can easily be scaled to the right size when importing. Then trace the image with appropriate drawing tools to digitize the image. The digitized image can then be exported in a number of file types (DFX, SVG) that can be read by the CNC drawing tools at ASMBLY (Vcarve).

You could assemble these digitized patterns to build a 3D model of YOUR airstream in Fusion 360. That’s getting into the weeds a bit. But it IS very empowering to develop skillsets to build virtually ANYTHING at ANY scale. Fusion 360 is not the only platform to do this, I took this image and constructed a digitized model and 3D printed model much larger

To this: Photo taken on a cool Wired magazine cover. I am not impling this was a story about this model that was feature in Wired. 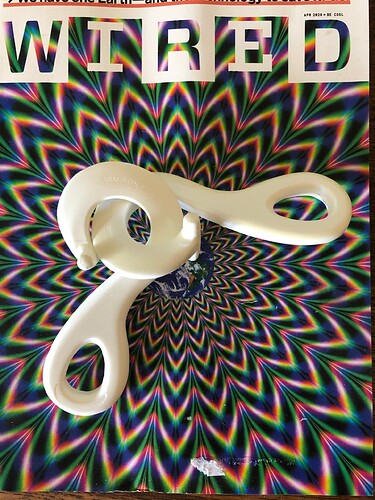 You might want to consider learning about the ‘Print plus Cut’ features on the lightburn lasers.

There’s really only two ways to do this.

Here’s a local company that will do a scan for you. I have no idea what the cost is. Faro arms are like $5-8k so I imagine it’s like $300-500 (literally a wild guess based on my camera experience and comparable equipment costs).
http://www.absolutegeometries.com

Weird. I wonder if they’re still in business. The above link will work.

Pretty excited to start using this thing. If it works out well maybe it will be something worth buying for the space. [image]

The scanning technologies have gotten really good in the last few years. If you go the old school route, try to minimize the amount of scribing whenever possible. I’ve worked on a couple of van builds. Nothing on the vehicle is flat or square. Scribing every part is extremely time consuming (unless you want to get really good at scribing!), so instead build regular cabinet boxes that drop in and then scribe in your filler strips.

I’ll be honest with you, I’ve had little time to play with it, but from posts in the FB group who also have it, if you put the time into it, you can get some great scans out of it. Maybe on a date where textiles isn’t busy, I can set up in there, out of the way (the lighting is pretty good), and hone the technique.

@MMcATX showed me a lidar scan on his iphone using the Polycam app. Seemed like a very nive app, and I believe you could pull measurements from it. He would probably have more insight.

seems like they’re no longer around as they didn’t reply to emails. this place did, though: Expert 3D Laser Scanning Services in Austin

so much for that idea.