I recently bought a CNC machine, and have been enjoying learning tonuse it. It has a few labels on it that aren’t English. I was hoping to get help translating the labels. I’d like to re make them in English.
This first label is for the oil system. Any help would be greatly appreciated. 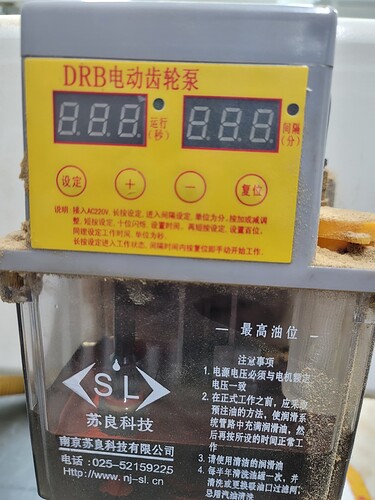 Can you get another picture? The resolution is bad, and you can’t quite make out the characters on the yellow label. I have a bunch of friends in Asia that might translate, but I’ll need a better photo.

Like @JoeN says. Try using the camera option on the google translate app. It’s not perfect, but you can get part of the way there

Limited success with Japanese and Chinese. I don’t remember specific Chinese examples, other than being frustrated, but the water boiling kettles in Japanese hotel rooms had some characters that translate to “dragon”. Never did figure out the air conditioner… Still, no harm in trying Google.

Agreed on it having limitations, but it’s easy enough to try. When in Japan, I found some of the translations via this method to be absolutely hilarious. But I still learned some stuff.

Google Translate is giving me vaguely plausible translation of that photo. Some gibberish, but enough to kinda sorta get the idea given the context.

install the app and play with it? I’m getting slightly different sentences depending on how I the photo, so it’s probably on the verge of too blurry to recognize the smaller text.

a native speaker would of course be best for exact translations

If this fails. One of my students who graduated has a native Chinese speaker who can help

Thanks guys. I didn’t know Google translate did photos. That being said, I more inclined to get a translation from a person, in case some interpretation is needed. I’ll start with better photos.

That looks to be your auto oiler. You have the context. Give it a try with Google Translate