TLDR: I made an outlet box for one of the misbehaving electrical cord reels; it should solve a number of issues. Try it, so we can decide if I should make boxes for the other problem reels. 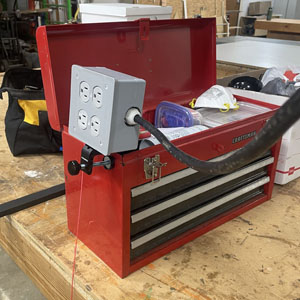 As most of you know, the electrical cord reels in the wood shop have a number of issues, mostly that the plugs have become so loose that cords don’t stay plugged in. And, while all of them do have working springs for retraction, the ratchets (which keep them in place while extended) don’t function well. In fact, I don’t think the ratchets on the two western reels work at all.

I was looking for a solution for the first problem, and it turns out you can’t get three-receptacle replacement ends, only single ones. But on some theater tech jobs I’ve worked recently, I saw they use extension cords with boxes on the end containing the receptacles; those boxes are called doghouses. So after bouncing the idea off a few official people, I made a prototype of something like that and deployed it on one of the cord reel ends today. (I chose the southeast one, nearest the router, because it had a break in the outer cord sheath that I wanted to repair with heat shrink before it became worse.)

The box has a number of features. We have four outlets rather than three. Every bolt that goes through the outer case is nylon, to ensure electrical isolation. (Probably overkill, but I’ve been zapped a few too many times by faulty wiring.) There is redundant strain relief inside the box on the main cable. And the main added feature is the attached clamp. It can swivel 360 degrees (a nylon nut prevents it from loosening while doing so) and opens up to about 1.6 inches, so it can fit around 2xN’s. It can therefore hook under the table edges and stay there under the force of the reel’s spring (without clamping). Or it can be clamped there, or anywhere else convenient. This addresses the issue of the failing ratchets, but it’s handy no matter what. The cords have taken some abuse from the various ways people have held them in place; now it can be attached anywhere without any fuss.

The total cost to make this was about $45, more than I had hoped. (I will note that this is similar to the cost of buying pre-made audiovisual tech doghouses, and they don’t have the attached clamp, which was the most expensive component.) Now that I know what I’m doing, I think I can get it down to about $30, which I think makes this worthwhile. A new, cheap Harbor Freight cord reel would cost about $75; a new, high quality cord reel would cost $100-$150.

So try the outlet box I made for a while, let me know if you have any suggestions for modifications, and then we can decide if we want to make such boxes for the other troublesome cord reels as well, or if we’d rather just spend the money on new cord reels. (And if we do get new replacement or additional cord reels, I could probably come up with a way to attach a clamp to them if that aspect proves useful.) 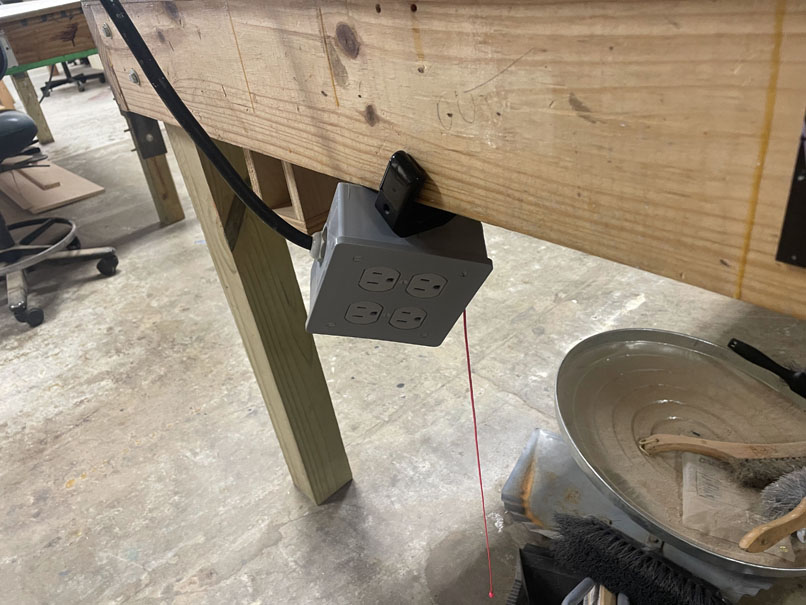 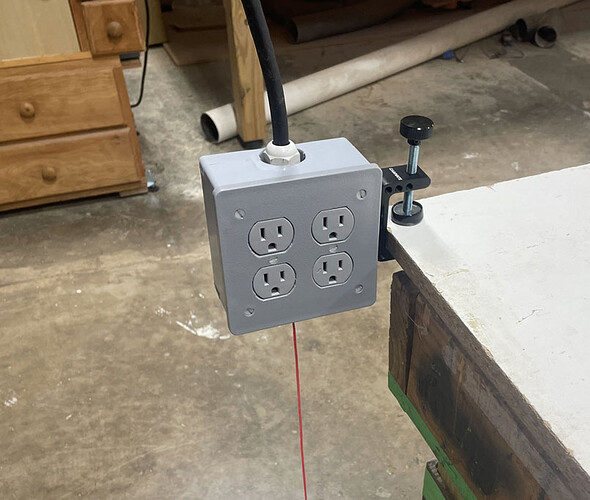 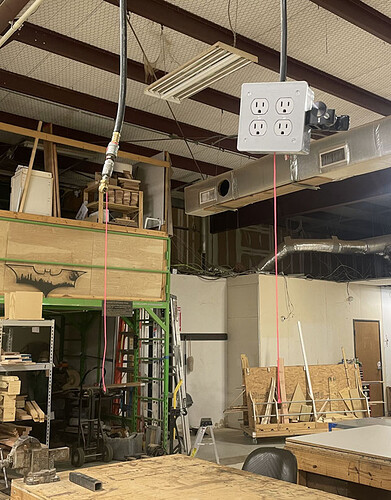 Awesome! Those cords have been an issue for ages, thanks for tackling this!

One thing that seemed like it might help would be end the reel cable in a NEMA L5, a twist-lock for 120VAC. Then you can plug in a replacement for the soft 3-way hydra thing ending in an L5, or a power strip, or a quad box.

Thanks for prototyping this and installing the test version.

@dannym I definitely considered something like that when I was brainstorming this. However, a NemaL5 connector on the reel plus a short cord (NemaL5 plug to 3 outlet) would also be about $30. A power strip would have the minor advantage of a switch, but I didn’t see any with an original locking plug. A NEMA L5 connector, plug, and a power strip would be maybe $25. And those prices don’t include a clamp to address the reel ratchet issues. And I’m not sure I see the point in being able to switch between these options, so there’s no reason not to wire the box directly (which is also much cheaper). You could also wire an extension cord or power strip directly to the reel cord, but then you’ve got a splice in the cord you have to protect. Making a box hides that connection and gives the necessary strain relief.

A single conventional connector for the reel along with a short cord to a 3-outlet end, plus some device I made to keep them attached, was another thing I considered: I could probably beat the price of the two NEMA connectors. But then I came up with the box plus clamp idea.

.
One thought for @Jon and @jamesfreeman: I know there’s no way to fix faulty springs in the reels, but as I discovered, the springs are fine; the ratchets are the only problem. I think the clamp is a nice bonus no matter what, but it’s only necessary because of the faulty ratchets. Are the ratchets possibly fixable? Replacing the loose outlets and fixing the ratchets would also restore full functionality, without the clamp.

I was having fun doing my usual over-engineering.

I did have one question about an oddity I uncovered, which perhaps some of the longer term members can explain. I had assumed that this taped section covered another damaged section of cord, but when I removed it, everything underneath was fine. This was a very thick sticky tape, with the added zip ties, for no purpose I can fathom. Anyone know why that was done? 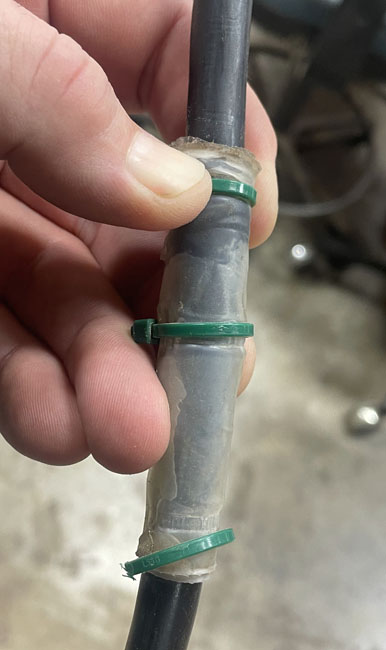 Some very brief research suggests a common root cause of ratchet failure is just the pawl(s) getting grotty and stuck, which is fixable by a clean & lube. Ratchet repair kits are commonly available for name-brand reels (which I’m pretty sure ours are not).

It might not be a bad idea to get two new reels to replace a couple with failed ratchets, then refurbish the old ones for reinstall elsewhere.

My thought: clean & lube level repair is worthwhile, replacement parts only if they’re pretty cheap (which I doubt).

I think we need another reel between the CNC and the tables. I’m not sure if or where a second is needed. The sanding tables have outlets built in. I don’t know what the plan is for powering the track saw table when it’s added, so maybe there.

I did a quick check of the two metal shop reels; the one over the old autobay is like the others: loose outlets and intermittent ratchet. The one over the welding area is a bit different: the ratchet is intermittent but can get stuck pretty hard, and someone already cut off the outlets and replaced them with a single standard connector. Andres was in there and told me that having only a single outlet was an issue; sometimes he would grab the more distant autobay cord because he needed multiple outlets. I think that reel is our first candidate for replacement.

I saw the prototype being used duri g the Shaper class last night. Seemed to work like a champ.

Yes! I was in that Shaper class (thanks Tom) and we did have to loosen the clamp and move the outlet box down a bit to clear a spot where the Shaper worksurface would clamp to the bench. It worked great!

At one time, we had 2 shop vacs, the Shaper, and the domino joiner tool all plugged in. We never had more than 2 of those things on at one time. I’m not sure if a breaker would have tripped with everything on. But it kept us from having to unplug and replug things back and forth.

With the two tables near the lathes rotated, the day one had no easy access to power. The extra table we are planning will also need power. So I’d say that we need two more at the east side of the Woodshop. One by CNC is also a good idea.