Hey guys we moved the blue laser to the new “laser room” formerly the classroom.

Only thing that is different is that the switch to turn on the laser and the blower is just a power strip until we mount a real one on the wall. 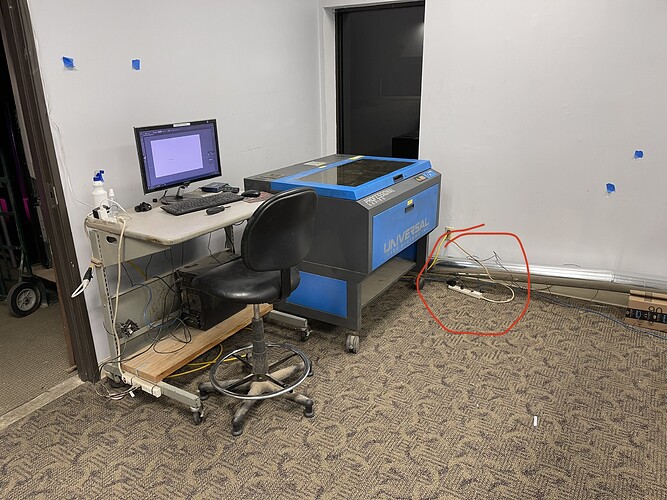 Yay! That’s so exciting and looks great. Thanks for pointing out the power strip on the floor so people know. Tagging a few people I know use Blue just to make sure they see this post.

I like the idea of having a dedicated laser room, and this looks nice.

Is there a work table? Or a plan to move one in there?

I see that the computer desk has been moved to the opposite side of the laser, was there a specific reason for that? I assumed that placing it next to the laser controls was intentional, and that seems like a better setup.

I think the plan is to move the red laser in there as well, is that right? I have often thought about improving the current setup for red; I wonder if it would be possible to set up the red computer desk closer to the red laser control panel? Maybe with a standing desk similar to the one shown above?

I know there may be some constraints on laser placement, so I understand if there aren’t a lot of options. And I know these are sort of micro-optimization concerns, but it seems worth the thought and effort for the lasers.

I’m not sure if we’ve got a work table in there yet, but we definitely plan to have several in there so that there is plenty of room for people to lay out their materials. Depending on space, we might be able to squeeze a little sheet storage in there as well

The placement for the desk and laser for Blue was simple based off of what fits best. The controls aren’t all that far away and with Blue you can control it completely from the computer anyway. A wall switch will get added later for turning the laser on/off; the power strip mentioned here is temporary.

Red is EOL. We will not be moving it into this room. Once Tarkin is online, Red will leave the shop. Depending on budget and potential discounts we can get as a nonprofit, we’re also looking at purchasing an additional large scale laser.

We’re wanting to transition all the laser desks to the same standup style as the one Blue has. It’s really nice being able to see into the laser bed from the desk and work at the computer standing for quick back and forth stuff. It’s also nice to have compact desks like that one so we can dedicate more square footage to work tables. @EricP mentioned some CNC designs for desks out of single sheets of plywood. If we can’t find cheap desks like this off the shelf, that would be a cool thing for us to research more and build.

Red is EOL. We will not be moving it into this room.

Ah, got it. Does that mean we’ll continue using it until the next time something expensive breaks? Or is there a specific date we’re getting rid of it?

Tarkin (the big white machine in the laser room) is the bigger-better Red. It has a larger bed and higher power. Danny’s in the process of getting the laser mounted in the chassis now.

We’re only keeping Red online until Tarkin takes over.

Hey, the old laser alcove got cleaned out, which is great, but there was a box with a lot of the laser parts and a blue panel, and a cleaning brush that are gone missing and we need to recover ASAP. Also a heavy roll of MLV that we should really use to try to dampen the steel ducting in the laser room, the noise level is already pretty significant on Blue’s duct.

5 posts were merged into an existing topic: Tarkin buildout