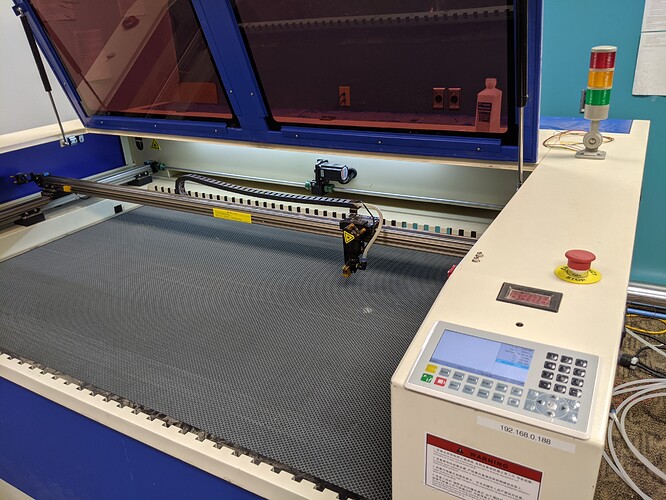 This is going great! It’s jogging around, aligned with a test beam, everything is coming together and going back into the equipment bay.

There is a very small coolant leak at both the chiller’s ports. It’s not the push-lock fitting, it’s where the threaded adapter goes into it. The port it is going into isn’t cracked and the threads aren’t damaged. I put a generous amount of pipe tape on the threads and the leak is really miniscule, but still there. So something isn’t matching up and I can’t quite figure it out. Any ideas? I don’t think it’s a MPT vs hose thread prob.

When you get a chance. Post a pic of the tiny leak. I like using ptfe liquid thread sealant on certain fittings. I assume you have some other issue

I got the aluminum brackets cut. I will machine them and drop it off.

Is there a computer identified to be dedicated to Tarkin?

There is not one one set up. However, it’s on the network, so with the static IP adjusted, it should be reachable from Blue’s computer, which has Corel, Illustrator, and Lightburn on it. Blue is going to need parts, so this might be workable, other than facing the wrong way.

I’m just using my laptop at the moment. The machines we have there are quite slow- as I mentioned, someone left a new SSD on top of Pearl’s machine. I think it will do great with a fresh install, and since this is hard drive, if you run into a hitch formatting and installing the OS and applications, you can always just plug the old hard drive back in and revert, presuming the software license for the old install has not been disabled yet as part of the move. We would need the license info though and I haven’t heard anything on that front yet.

@dannym It seems the immediate low-effort solution is temporarily mapping Blue’s PC to Tarkin for testing. In parallel perhaps a PC in the classroom could be identified to be repurposed and prepared for Tarkin? Ideally when Blue’s parts arrive, Tarkin and its PC would be ready for use and Blue’s PC could be mapped back.

If this is an acceptable plan then who can change the static IP and identify a PC candidate for Tarkin?

You’d just ipconfig check the IP# on Blue and set Tarkin to one with the last field only changed to something that isn’t used- generally just ping and if anything responds, choose another.

We do need to tell the router to not hand out that IP# in DHCP, the controller is not always on and the router would see its static number as available and might hand it out. Higher numbers are just not likely, though. 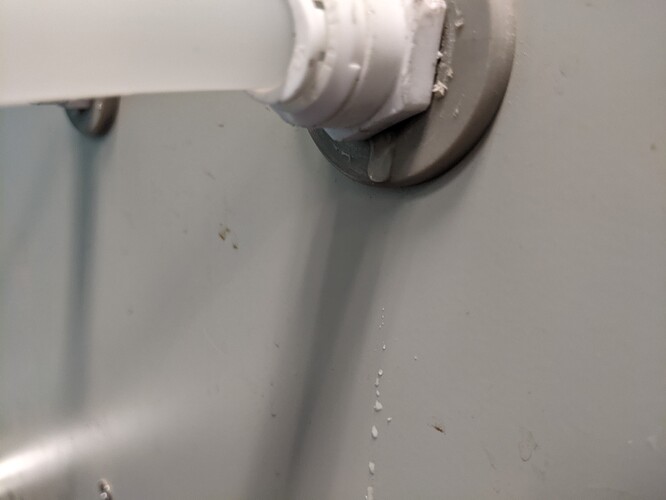 I have a PC for it, just needs a new windows 10 OS installed on it. If someone wants to do that ping me and I will put it out for you.

I could do it tomorrow after teaching Woodshop Safety.

I added some more thread tape. If that doesn’t work. I will bring better thread tape next time.

Hmm. That is an odd thread. If this fix doesn’t work. Maybe time to look at a new fitting 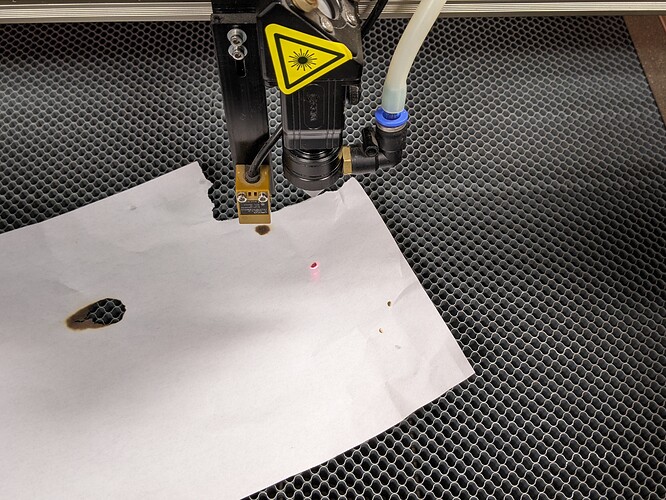 And so it begins. System components lined up surprisingly smoothly. The planning and off-machine bench calibration really paid off. Mirror #2 is a design we’re not familiar with and I hacked it a little bit to make it align but I think I’m just not seeing how its unique construction works.

Needs beam shaping installed. By 2.6M meters it’s oveexpanded, that can be shaped right down though. This is part of the hacker magic, a stable quality beam across 2.6M is quite a thing.

We’re awaiting some inductive proximity sensors that aren’t carried by US vendors, which is odd because they’re an interesting unique form factor. They should have been here a couple of days ago. We can hack a normal one but I’m not sure of the point if the real ones come imminently

This will need calibration. Its XYZ distances move in the correct direction and all, but the scale of steps to actual distance is only ballpark.

Plus, process tuning speeds/accel to get the speed up without compromising performance.

The Z lift still needs the lifters secured against shifting. Joe is making some brackets, it’s kind of a pain to remove the table to install

The spare lenses are here. This is important because I wouldn’t be shocked if even the premium CVS lenses blow up with this much energy behind it. Worst comes to worse, I have gallium arsenide optics, with a higher thermal conductivity the damage threshold is much higher. They’re marginally less efficient and opaque to the red dot pointer so you need external off-center laser pointers mounted on the head.

The leak isn’t troubling us right now, but I got new fittings anyhow in a different type that will be here early this week. I have the nontoxic mfg-recommended Dowfrost glycol to add to the coolant, but it would be best to get all the anticipated system openings that would result in some coolant loss. like for changing fittings, out of the way while it’s still distilled water.

Ultimately, in addition to the Ruida panel I want to add a touch pad to better explain the status and forwarding meaningful maintenance logs onto a web interface we can check anywhere, like if the chiller’s flowing but out-of-temp-range, a power supply dropped offline, or VSWR is developing. By default, these systems tend to just have a generic “not ready” flashing for multiple probs, leaving you wondering if you should continue to fiddle with the assumed door interlock or look at the chiller or what. The system already has a test interface with a simple command line interface from the terminal and it’s already proved invaluable during just the alignment.

There are some safety interlocks and system code to add. Right now the test interface doesn’t have a way to force the Ruida to stop cutting. This is fairly simple to add though by just adding a relay in series with the door interlock. This will mean other issues will seem like “door ajar” errors, thus the need to have a panel better explain the problem.

Say, we do need the proper exhaust fan. I’m thinking that never got ordered. We may be able to plumb this exhaust fairly quickly, but this really needs the 750W fan in this size.

If you’re all antsy about it, you can download Lightburn 1 month trial download and familiarize yourself right now: Download & Trial - Try before you buy – LightBurn Software

The air assist can be either a solenoid (have, needs fittings) or a cheesy diaphragm pump. It would be nice to have an air pressure sensor here to avoid running without air and destroying the lens if, say, the shop air is off.

A thought- we could just move the chillers, which are a bit noisy, out into the hallway. Like the space by the door that has junk piled up on it.

A PC with Windows 10 and Lightburn is now in place for Tarkin. Thanks @EricP

This is so exciting guys!!! I’m going to go ahead and add a slot for Tarkin in Skedda with it greyed out and add the link to this thread in the info so more people are directed towards it. I think I’m also going to hold off on the newsletter one more week so we can highlight Tarkin in it.

Nevermind, I’m silly and realized this info is readily available on the wiki

I haven’t actually seen the Wiki, I should probably add a lot of stuff there

@dannym send me a link for exhaust fan

So exciting. I can see so much of hard work, by so many folks, going into getting the machine up and running.

The inductive prox sensors that are a different (smaller) form factor than the common horizontal/vertical ones haven’t arrived. The USPS tracking stops at “Departed Shipping Partner Facility, USPS Awaiting Item October 18, 2021 at 7:58 pm GRAND PRAIRIE, TX 75050”. Which is weird, I ordered other stuff at the same time that went through this exact status on Oct 18 and arrived on the 20th.

Is there even any way to follow up on a shipment with USPS now? I don’t see how to inquire further, but something is definitely “up” here.

The sensor that’s there can be made to work if someone wants to build a spacer for it, at least until I can get this shipment of the right part sorted out.