There is a new air line installed for the cnc router. You don’t need to drag an air line across the shop. The new air line will get an air regulator. A curly air hose will be added also. Don’t drag more line from the red reel.

I have smaller poly air line that needs to be installed for helping cool and clear aluminum chips. We will be running this airline along the same path as the dust collection hose. The airline will be attached to the dust collection hose. The end near the spindle will have a nozzle with a needle valve to control the air flow. If you are interested in running this air line. Let me know?

The fitting on the red line is leaking air pretty loudly. I left it connected to the air gun so it wouldn’t be hissing constantly.

) Tell me what to do, and I’ll do it. I’m going to the manual mill class Monday night if you’re going to be nearby, or you can call me after 4pm.

I won’t be there today. I will grab the new poly air line. I want to mount the poly air line to the bottom of the dust collection hose/pipe. Zipties will work great. The flexible hose needs some slack for the z axis to move. I will bring the nozzle sprayer so we can mount it.

Thanks for volunteering. This will also make your life easier

This sure sounds tricky. The dust collector hose had to go through a number of tweaks and iterations to get it where it won’t bind up when maneuvered a particular way. We need to avoid zipties on the dust hose itself, too, although there are other softer ways to attach like velcro or gaffer tape.

I will grab the new poly air line.

Cool. Let me know where it’s at once you’ve put it somewhere.

I want to mount the poly…

I’ve got zip ties already, so I’ve got that covered. I was discussing this with Danny a bit, and he’s concerned that the zip ties may eat a hole in the vac line. I’ll work and find a solution that won’t wear through the vac line, while still allowing free range of motion and not bind up. I’ll look at it more once I see what we already have.

Should I detach the zip tie from the piller where it’s at now and move the hose it to wherever it’s needed to start the air line, or are there more plans for that? What about getting air near the CNC machine for the nail gun? What about the leaking fitting?

@dannym I have one of the coiled hoses that we were discussing at home. I’ll keep you in the loop on my plans.

We will replace the leaky fitting. We can use velcro on the flexible hose and zipties on the pvc. I’m not a fan of gaffer taper for this purpose.

Yeah, but it needs to be wide enough so it doesn’t put load on the thin parts of the plastic hose. I’m sure an idea will come up. I’ll worry about that. I just need to figure out what we’ve got already, and where it is. Let me know where the nozzle is as well.

I’m with you about not using any kind of tape. It’ll eventually gum up and fall off if we’re not careful.

The poly air line doesn’t need to be tightly installed to the flex hose. The top of the z axis had a hard point to help anchor from the hard pipe down to the top of the axis. I will pick up a new quick release coupler.

I’m going to drop off the new air coupler and leave the blue polyline out for you this afternoon. @zackg 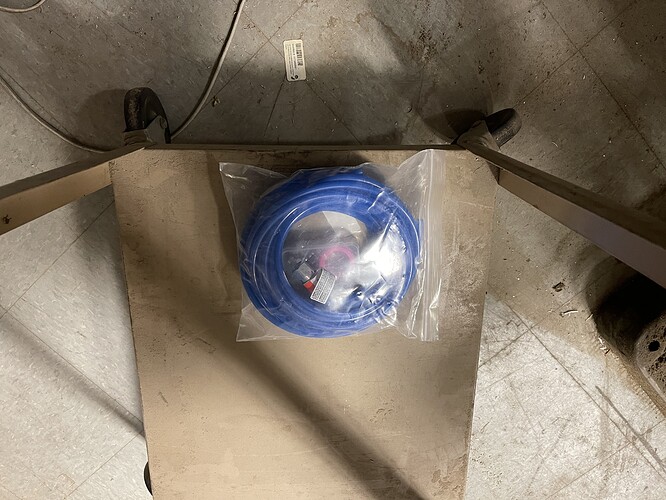 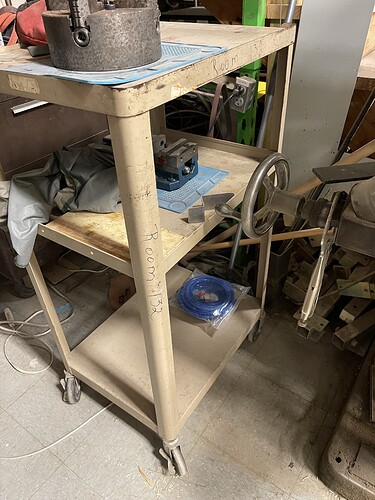 @zackg Here is the poly line and push to connect fittings for the air line. There is also a new coupler for the leaking one in the bag

The nozzle is on order. Should be here friday

The air line for the fiber nail gun has been installed. It has a regulator and quick release fitting. There is a hose on order for it. Please don’t mess with the regulator setting. It is set to 90 psi.

@zackg installed the blue poly air line for clearing chips. The install will get more permanent after a short period of testing. He reports that it is great for his aluminum cuts.

Just a general report. We probably need a tag on the nozzle that says for metal use only or something along those lines.

It works great for clearing chips. One of the cuts I did was a long slot that normally gets bogged down with chips and required constant hand clearing. No more. No recutting of chips, it just worked. It kept the part cool when doing some roughing work as well.

The only drawback is the air is rather wet. And that’s both a good thing for cooling, but also bad because of water and electronics and the spoilboard. The regulator spits out enough water that over a short period of time it’ll start dripping. This is easily controlled however by stuffing a paper towel under the regulator, replacing it every hour or so as it gets saturated. On the other hand, it’s nice and cool air.

It does make a bit of a mess though, I have to spend extra time cleaning, but I think it’s worth the trade off to have it. I sweep the bed with a broom and then use compressed air to clear off any remaining fine metal. (There’s no sawdust), followed by a thorough sweeping of the area. If the shark cnc was moved, it’s make cleaning that side a bit easier. I found chips about 6’ away from the bed, and my part was on the far side of the bed. I’ll just plan some extra cleanup time when I schedule time.

Overall I’m going to make good use of it, the extra time I spend cleaning is saved by not having to replace endmills as often and not having to babysit several sections to do chip clearing. My (cheap) endmills are staying sharper longer.

The nail gun is giving me fits. I look forward to the new line coming in, so we can run it on lower pressure.

I think once a solution for dryer air is installed. We can use the dust collection system in conjunction with air nozzle. The air has to be dry and no added coolant. I want to see the dust shoe get updated. I ordered the small foot print dust shoe for my router. It works much better for dust collection. The new dust shoe could use a few different design features.

Do you think the dust collection system has enough power to lift metal dust off the table? I haven’t used it a lot.

I found a spare air line for the nail gun. I will drop it off soonish

There’s one on order too