Look what Tarkin can do!

Exploring new modes of cutting with Tarkin by twisting Lightburn’s modes into unintended usage. These cuts were into 19mm of I guess spruce, and the edges are impossibly straight and clean all the way down. It’s slow, but the results are MAGIC!

I’m also thinking that on Tarkin specifically, there’s more I can do with pulse mode. I think we’ve got it stuck in second gear right now and it can do even more. 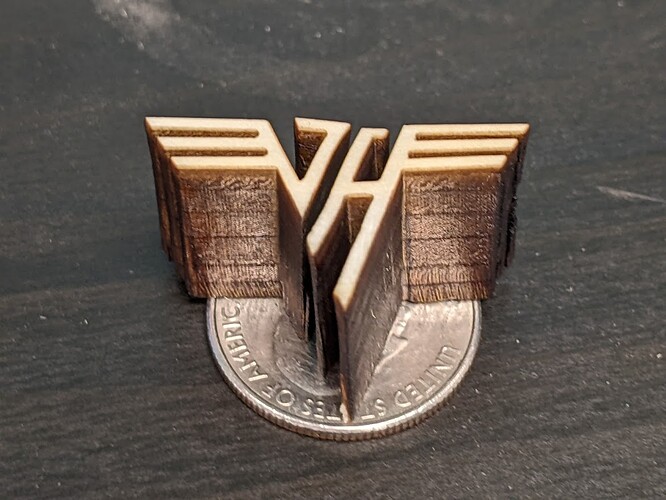 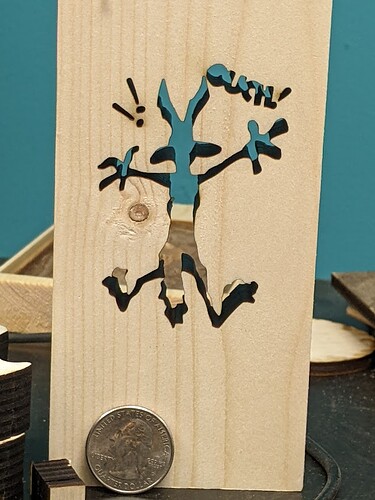 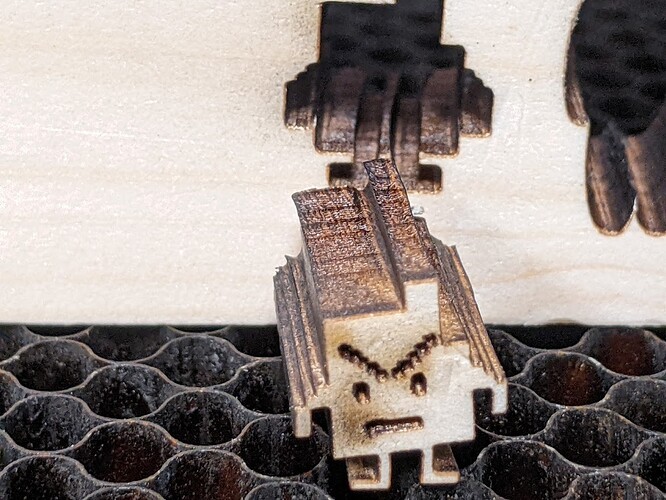 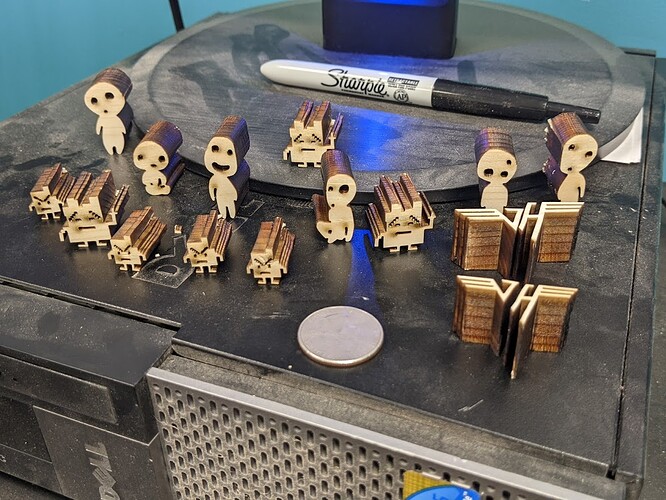 This is great. Love the rabbit silhouette.

I figured out kerf adjustments to get this more exact. Realized that inner cuts (eyes) have to be on their own layer because those have a negative kerf, while the outside has a positive kerf.

Wile E Coyote, on the other hand, has a negative kerf because the outside of the cut is the intended product, not the cutout.

I am backtracking on the value of focus-. All this is done with focus0, the traditional surface focus.

Looks awesome! So those cuts were done using ‘pulse mode?’ Is that something I can attempt on my own, or do I need someone to show me how it’s done?

I was using Tarkin this morning and noticed that some of my cuts were pulsing through the cut path rather than a continuous beam. We didn’t cover this in the laser class, so I was kind of at a loss as to what was happening. I’m guessing someone before me set it up for that kind of cut and I didn’t know.

It’s an option for the Line Layer. If you pull out material settings from the Library, they’ll be what they’re intended to be.

But you create a new Layer by making a new object with a new color your LB project hasn’t used yet, LB doesn’t have a particular default and anything can be set, including start delays, leads, overcuts, and dot mode. So just making up a new speed for a new Layer setting isn’t quite enough, you need to scan through the settings and make sure it doesn’t have anything set you don’t want.

It’s under the “Advanced” tab. Turn Dot Mode off 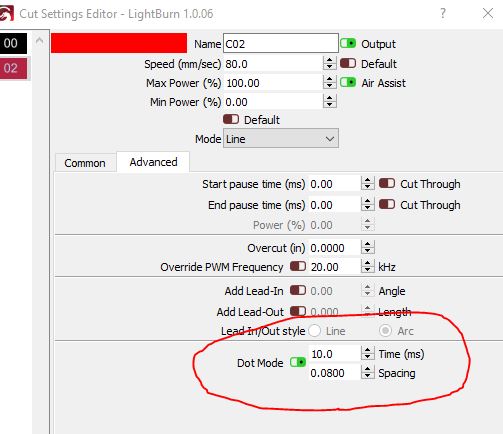 Is that something I can attempt on my own, or do I need someone to show me how it’s done?

It’s there in settings. Dot Mode was never intended to be used this way by LB’s authors, but it’s a pretty groundbreaking hack if you put in weird values.

I’m still experimenting, I’ll do a writeup soon when I know more

Gotcha, thanks for the update

damn i think i need one of them mooninites!

I also set a kerf offset. If you just select a new layer without checking, a bunch of things could be set. Start/Stop end times, override PWM, Min Power, Tabs, Perforation Mode

If you go to the bottom and click “Reset To Default”, that might be a useful time saver, but it’s also too easy for anyone to click “Make Default” from anything so there’s no guarantee of what that default is. The default I found on my machine had Min Power 20% and Tarkin’s such a linear power relationship that this field should normally be set to 0.

So, even if you’re a vanilla user, you do need to be able to look through the 2 tabs to see that none of the “special” stuff got set when making a new layer. If you load a Layer from the material settings library, then no “special” features should be set there unless they were intended to be set. You could load a similar materials setting to what you have and tweak Speed alone to adapt it.