Hey everyone, I had a friend draw up some files to use on vcarve since I have a mac and I cant use the software. I’m guessing he used the free version and the files aren’t compatible. Every time I try to open them on the computer at the maker space I get these warning messages. Is there anything I can do to fix this? I would gladly compensate to fix it. I would love to get these files cut out asap. Thanks a lot! 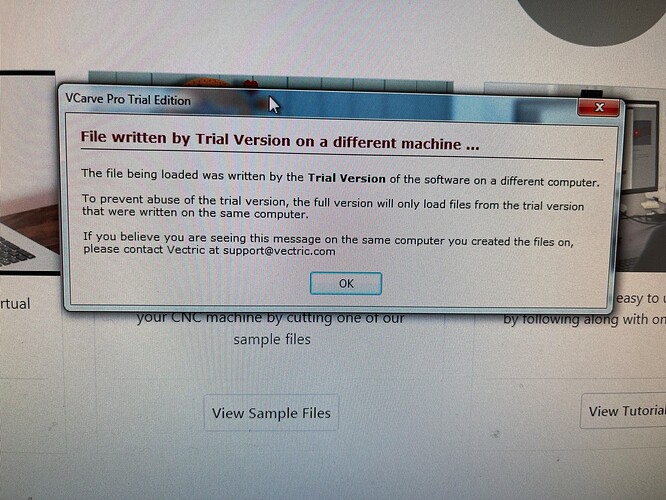 Did your friend enter the maker space key in his trial version?

(I PM’ed our ID to Patrick, please do not publicly post our Makerspace ID, although it’s not a big secret)

Your VCarve Pro Trial Edition (TE) must be promoted to a VCarve Pro Makerspace Client Edition (MCE) by entering our makerspace ID.

Yeah, it sounds complicated to explain, but actually kind of simple. Their licensing model is a pretty sweet deal overall, it didn’t cost much for a Makerspace ID and members can make an unlimited number of their own linked Client Editions at no additional cost, whose saved linked projects only load at our Master Edition or another Client linked with the our ID, and only our linked Master Edition can do the final save-as-g-code step. This makes sense as a “leaked” Makerspace ID isn’t going to make “pirate” copies, they’re all limited to only working with that particular Makerspace Master Edition as per their intended use model.

This was crazy helpful! Thank you very much!